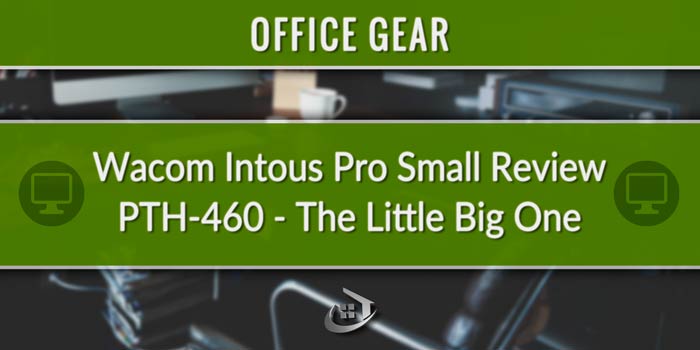 This my review of the latest Wacom Intuos Pro Small PTH-460 pen tablet/digitizer. It´s always exiting to receive a new product from Wacom. Their products always feel premium and Wacom is the undisputed first choice of the professional graphics artist.

Wacom pen tablets have been an important part of the way I work with computers for many years. Primarily, I have used digitizers as a mouse replacement, but also for occasional Photoshop work.

In some ways this is an odd product release from Wacom. The medium and large versions had been out for a long time before this, the smaller sibling, was released a while back. 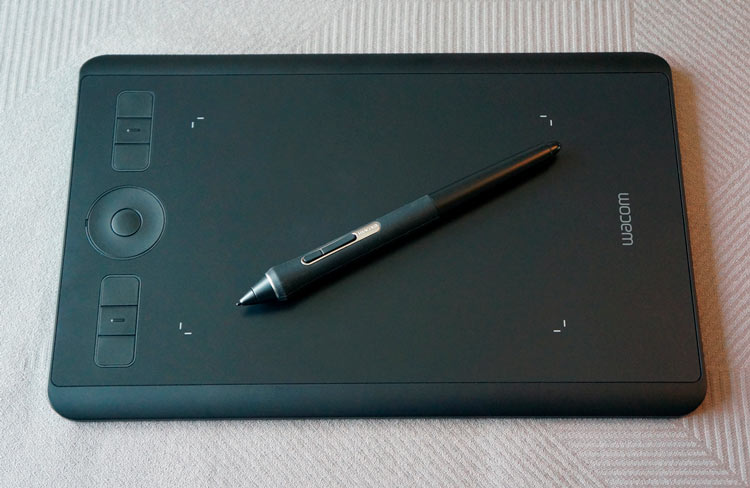 For some reason the small version is somewhat neglected in this product generation. Apart from the late release a couple of things are off compared to the bigger models:

So, why is Wacom downplaying this model?

What´s in the box 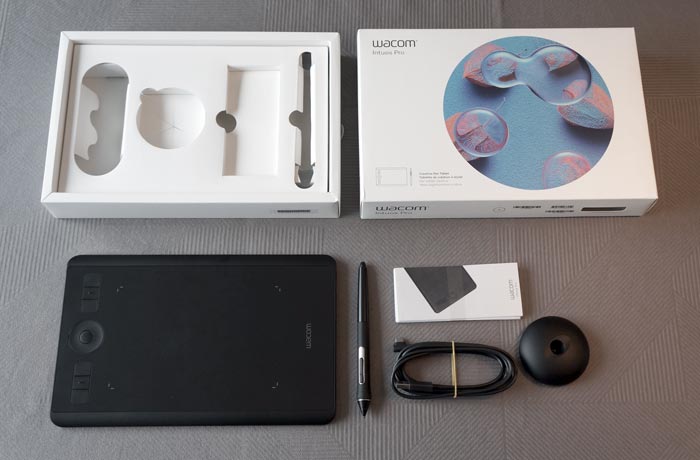 At first glance, the packaging has an “Apple´ly” look, but alas, at closer inspection the packaging is disappointingly plain compared to earlier versions.

Obviously, this is a trivial matter, but the Intuos Pros are expensive tools and you would expect a bit more attention to the unboxing experience of a premium product such as this. As indicated, this has always been the case with the Intuos Pro product line up until now.

The Bluetooth battery is now integrated in the tablet. First time buyers will probably not make note of this, but in the previous models both battery and Bluetooth were physical additions (See photo).

Most people will sure find this practical and preferable. The drawback is that even if you don’t use Bluetooth you are always charging the battery for no reason.

Personally, I would have preferred the choice that the previous model offered.

The Intuos Pro PTH-460 pen tablet has a much smaller footprint compared to its predecessor. To the first-time buyer this may sound good. But smaller is not necessarily better in the case of digitizers. This has both advantages and disadvantages, but more on that later.

All things being equal though, the smaller size is extremely practical and makes it much easier to fit the tablet on your desk next to or in front of your keyboard.

For the first time since Wacom introduced coarser “paper like” texture sheets on the Wacom Intuos Pro 4 and even coarser on later models, they seem to have listened to the users. Even though we are not quite back to the last great Intuos Pro model, the Intuos Pro 3, the surface does offer less friction between pen and tablet.

While this means less wear on the nibs and, in my opinion, a more comfortable user-experience the surface still scratches quite easily.

Personally, I never understood the decision to create more pen/tablet friction in the first place. Since then you´ve had an almost immediate wear on the nibs which creates a sharp edge on the nip that leads to extensive scratching of the drawing area.

Honestly, on the most recent models (The ones without version number) you can tell the wear on a fresh nib after only a few hours of use.

Compared to that, my very first Wacom tablet (Intuos Pro 2) does not scratch at all. I have never once changed the nib and you can´t tell that it has ever been used. If this tablet was not 4:3 (and supported) I would still be using it.

As mentioned, exchangeable texture sheets are not available for the small version at this time. I am very curious to see if they appear later. I would really love to have this option when the surface gets too many scratches.

Also, if you want to sell the tablet down the line, the value will increase tremendously if you can just apply a fresh texture sheet.

The pen holder has been re-designed. The base is now made of iron with a plastic top that unscrews and holds the extra nibs. I didn´t have any problems with the previous design, but since this one is lower and heavier it is more stable.

However, the steel part is somewhat difficult to grab, and the screw mechanism has a short and imperceptible travel, so you easily risk fumbling with the thing when you open it.

If you like your desk my advice is not to open the base while sitting at your desk. The steel part is heavy with sharp edges and it will scratch or dent your desk surface if you drop it.

I first installed the tablet on my Mac Book Pro. At the time I was running MacOS 10.14 and I had some configuration issues. Googling the issue revealed that I was not the only one. It took some massaging of the privacy sttings and a couple of reboots to get it to work properly. Thanks Apple :o).

The installation on Windows 10 was straight forward with no hickups.

The driver is largely unchanged, and you will feel right at home if you are used to Wacom preferences. Changing tablet buttons, pen settings and active area configuration is easy and straight forward.

Personally, I never use the tablet buttons. The first thing I do at installation is to turn everything off which is also the same procedure by the way. The only difference is that the wheel button does not turn off since it also functions as the Bluetooth on/off switch.

Touch is activated with a physical button on the PTH-460 which is great. I very much missed that on the previous model (pth-451). 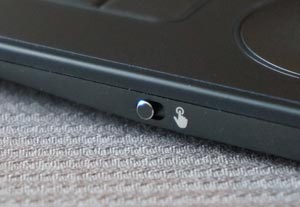 The touch experience itself is excellent. Everyday app and browser navigation is effortless due to multitouch capability and silky tablet surface. While it´s not quite on par with the Apple touchpad experience, it´s pretty close. Considering the touch functionality is a secondary feature here, the quality is quite impressive.

The pen tablet offers no haptic feedback, but you´ll quickly get used to working around that. Tap clicking is less intuitive than an actual click, but I don´t experience that as an issue.

The tablet comes with a cable of good quality and decent length. It has a practical 90-degree tablet connector with a USB-C style format. This means that the tablet can easily be used with the cable attached for both left- and right-hand use.

There is not much to report here. Connecting the pen tablet to Bluetooth is straight forward. You simply activate Bluetooth on your computer and search/connect as you would with every other Bluetooth device.

Bluetooth can be turned on and off by clicking or holding the home button at the center of the tablet wheel.

Bluetooth automatically turns off when the USB-cable is connected.

The increased resolution of the active area really removes resolution as a noteworthy consideration for 99.99% of all users (Meaning: so good that you will never notice limitations to precision).

As noted, this model has shrunk significantly. Also as noted this has advantages and disadvantages. 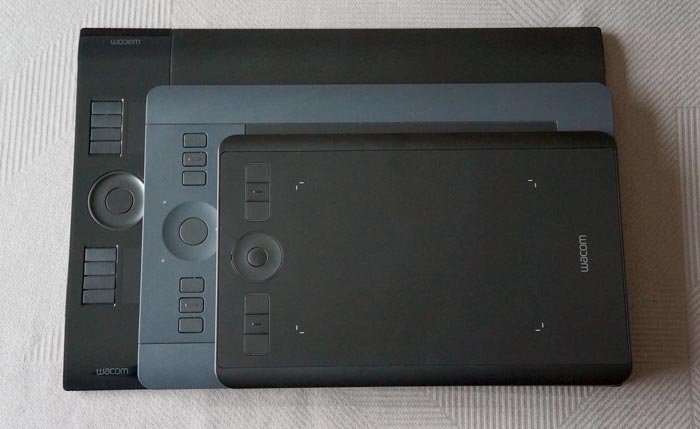 From a practical and ergonomical perspective, this is marvelous since it is now much easier to fit the tablet into your reach.

The reduction in size has been achieved by reducing the size of the tablet frame. This means that you have less space on the tablet itself to rest your hand. However, due to the rounded tablet edge as well as the reduced thickness of the tablet I have not been hampered by this change.

The before mentioned changes have improved this size of the Intuos Pro family as a mouse replacement.

The excellent touch performance added to the industry leading pen performance gives you a lot of options to add variety into your computer work.

The “R” in RSI stands for repetitive and this pen tablet is an excellent ergonomical tool to fight temporary or chronical arm strain.

I must admit that I am quite annoyed by the fact that this model is missing features that the bigger models in the same line offer. Almost to the point that I would advise against buying this size over the medium model.

However, there is a significant jump in price and not least physical size. But my advice is to do some soul-searching into what you need. If you can swing the higher price of the medium model you might be better off. If not only for the option to increase the secondhand price with the option to change the texture sheet at the time of selling.

As a mouse replacement the small PTH-460 version is hard to beat though. The compact and multitouch capable device is a marvelous addition to any setup. Yet, it will scratch eventually, and at this point I wouldn´t hold my breath for exchangeable texture sheets.

Despite my personal gripes with the choices that Wacom has made with this product, you will not be disappointed what quality and functionality is concerned. The Intuos Pro line is a very premium product.

Check the current price on Amazon 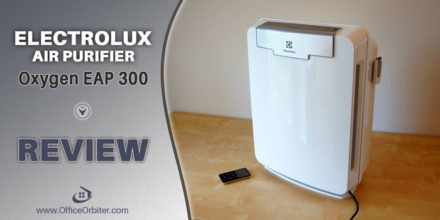 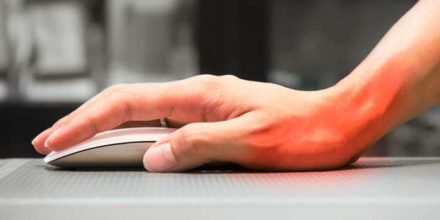 How to Prevent Carpal Tunnel by Improving Work Habits 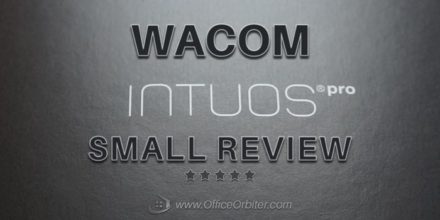 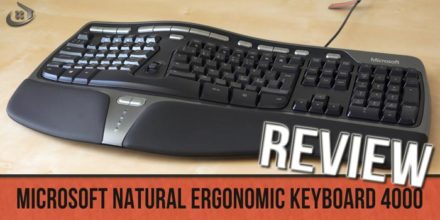